TOTAL SOLAR ECLIPSE mentioned on the CBS local news in the Dallas area of Texas (I am in Ferris, 35 miles south of Dallas).
Yes, on Aug. 21 the eclipse will move across the USA and we will be able it at 1:30:06 here for exactness (eclipses are always listed at Universal Time, which is 6:30:06 and UT is 5 hours ahead of us). Of course, the time will be prior to exactitude as the Moon nears the Sun and, obviously, the time will be after exactitude as the Moon leaves the Sun.
Astrologically, the Sun is at 28 degrees of Leo and 52 minutes, so when the Moon eclipses the Sun, it also will be at that same position of the SIGNS (NOT constellations - Astrology in Europe and the USA uses signs, called Tropical Zodiac and Asia uses Constellations, called Sidereal positions).
We use eclipses as they transit natal, progressed, and solar arc charts, as well as in return charts (a solar eclipse shows what energy is being cut off by the moon).
Posted by Lee masters at 3:44 PM No comments:

Huge Amazon buy - but nobody should be surprised - the astrological chart of Jeff Bezos shows from his age of about 8 he has enjoyed a goal of being the #1 retailer in the world and he is challenging Wal-mart now on the hard building front with Amazon's purchase of Whole Foods.

He says he wants to change the way people grocery shop.

I've shopped in the past at Whole Foods (the store in Dallas USED to be the ONLY place to find raw sunflower seeds that were unaltered with salt, etc.). Most shoppers are higher income people and are willing to pay a LOT more for organic foods.

At this point, I'm not sure Bezos's purchase is going to run mainstream grocery stores and Wal-mart out of the food biz.

BTW, the Magi chart used is for the re-incorporation that was done in Delaware - that is NOT the full history of the company.
Posted by Lee masters at 5:23 AM No comments:

Yesterday, I couldn't get the color map to load, so will try today with black and white map. 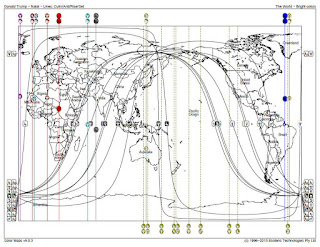 Posted by Lee masters at 8:53 AM No comments:

Am trying to figure out this Solar Fire 9.0 Gold astrology software in terms of creating a Johndro Chart for anytime we don't have an exact time of birth (for example, Margaret Mitchell) and so far, haven't figured  out how to do it - this is a VERY complicated program.

While doing that decided to look at Donald Trump's Astro-Locality Map and it is so interesting - see that Mars Ascending line very close to Korea and the Mars Descending line right through D.C. - in his natal chart Mars is in the 12th House - this means he will LOSE himself and his reputation as president and playing his games with Kim Jon-ung!

I'll post the map (these are very helpful in showing what energies are strongest where one lives or moves to or visits) Sorry, map didn't post!

Posted by Lee masters at 1:49 PM No comments:

Posting Pres. Trump's quad astrological chart - this is natal chart in center, next ring is Progressed to today, next ring is Solar Arc to today and outside ring are the transits. It was calculated using Solar Fire and I'm really getting used to this program after decades with Matrix. I love how easy and fast it is to do charts and add progressed, solar arc and other types of calculations.
Even Astrology 101 students using Piscean Age Astrology should be able to see the announcement today of the investigation for obstruction of justice (look at the Transit Saturn within one degree of the Solar Arc Jupiter).
And how does this go? Look at 4 houses from the 5th House and you get to the 7th House with that big old Neptune sitting there, so NOTHING will be definite about this - the investigation itself will have a lot of delusion in it. Comments are welcome on the Uranus ruler of the 7th House.
Also, interesting that Pres. Trump's progressed Sun and Solar Arc Sun (they always will be the same degree and minute) are at zero degrees of Virgo, so he and his administration have entered the MARTYR phase for the next 30 years (30 years for POTUS and the phase will be only for the rest of his administration). And wasn't the shooting at Republicans this morning an example of that! 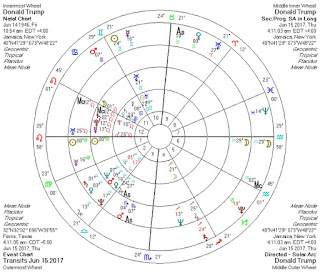 Posted by Lee masters at 3:02 AM No comments:

I've been studying the natal, progressed, solar arc, and current transit astrological charts for the head of ISIS, Abu Bakr Al-Baghdadi. Here is what I'm seeing:
Yes, the coalition forces came close to killing him in this most recent attack, but they didn't. However, he is ok with letting the world believe he is dead as he goes into hiding for the next 9 months.
His wife was injured in the attack - a chest injury and Al-Baghdadi is more angry than ever with the U.S. and Christianity.
While in hiding, he will be planning a huge attack on Washington, D.C. for March, 2018, the Islam New Year.
I am just NOT seeing in these charts that he died, even though the Syrians are saying he did.
This attack by the U.S. led coalition has made him realize he must fulfill his destiny of destroying both the U.S. and Christianity so that the Islamic Caliphate can rule the world, with him as Caliph.
We have a date, time of birth, and place of birth for him, so if this is correct, that is what is in the chart. However, how do we know this is correct data? He always has been secretive about his background.
There is a $25 MILLION bounty on his head placed there by the U.S. government, so obviously he is NOT fond of anything about this country.

I had watched a documentary on Islam that said the new year is in March, BUT there are various websites that indicate the new year is in September. I've contacted a Muslim friend of mine to see if perhaps Sunni and Shia Muslims celebrate different new year dates.
Posted by Lee masters at 3:19 AM No comments:

London Terrorist Attack at Bridge and nearby

Piscean Age Astrology - Was expecting something to happen today with Transiting Venus conjuncting that violent Uranus in Aries, but wasnt's sure where the event would take place and sure wasn't looking at the chart for the London Bridge.
That natal chart for the inauguration of the bridge in 1894 has a Libra Ascendant and Libra is ruled by Venus, so not surprised at all by this terrorist attack, but still horrible!
Some day there will be a computer powerful enough to hold the natal charts of every place on the planet, every tourist attract, every government, and every individual, and we'll be able to see ahead of time what is the possibility!
Posted by Lee masters at 10:12 PM No comments:

Purpose of the U.S.A. fulfilled

April 1st, 2034, Transit Pluto will conjunct the Pluto in the natal astrological chart of the U.S. Constitution (June 21, 1788). It is that Constitution ratification in Exeter, New Hampshire that made this an official country. That fulfillment in 2034 will mark the end of the USA as a Superpower.
All countries experience an up to the peak of energy and influence and then a down.
Greece was on top, then NOT.
Italy was on top, then not,
Britain, Spain, France, EVERY European country went through this.
Pluto marks the fulfillment of the mission or purpose or destiny of a country and for the USA, Pluto was at 17 degrees 49 minutes, which was occupying the vision of the Nervous System (and hasn't Hollywood fulfilled this very specifically).
The USA will never again be what it was. Another country will be on its way to the peak.
America as a Superpower will be ending and I think most intelligent people can now see the constant deterioration of the country, especially considering law and order.
Economically, militarily, families as the basis of existence, educationally - in EVERY aspect of the country, the USA's mission has already been fulfilled at the peak and it is on its way down!
From the time when I was young and started studying Astrology, I saw this coming and it has been awful to be aware of it!
BTW, Pluto in an individual's natal chart shows one's destiny or purpose of one's life.

In Aquarian Age Astrology, Pluto is known as "Grandpa Tumbles Wash & Dry." and Aquarius is the Nervous System (our sensory system that allows us to see, hear, taste, smell, and feel by touch).
Posted by Lee masters at 2:56 AM No comments: