8th house is this death?

I was reading of the death of Maeve Fahey Kennedy McKean who apparently died with her son in in the ocean off Chesapeake Bay, Md. The story is she was playing kickball in the back yard of her mom’s house (Kathleen Kennedy Townsend, oldest child of the late Sen Robert Kennedy and his wife Ethel) when the son kicked the ball into the bay water. The wife and kuds were at the MD home as shelter in place at the empty mom’s home since the kids would have more room to play at that house than their own home. The two (Maeve and son) got into a canoe to retrieve the ball but the wind pushed them out of the bay and to the ocean.

I had a hard time finding Maeve’s place of birth and was going to use my usual 12:01 pm for birth time (when i don’t have an accurate time), however, i finally found an interview Kathleen and David Lee Townsend did with People Magazine in which Kathleen states they were living in New Haven, Connecticut when David delivered Maeve at home at 4:55 am.

What is interesting is in the progressed chart to April 2, 2020, the 8th house is 21 Gemini snd exactly opposite is Neptune, God of the Sea, at 20 Sag. Also note Hygiah Asteroid at 21 degrees in the sec pg chart. 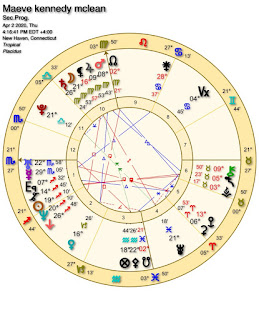 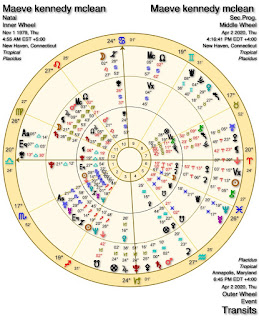 I will add that chart and the three-up chart of Maeve’s natal, secondary progressed, and transit.
Posted by Lee masters at 2:47 PM 2 comments:

Who was rescued? Was Q right?

The rumor is the woman mentioned by Pres Trump on March 22, 2020 in the Covid19 task force meeting as being rescued from a foreign country after General Milley was given the order is none other than Natalee Holloway. Could that be true?

There were no details although later the president said the woman is home with her parents. There was no name given for the woman and no named country as to the rescue. Earlier in his speech, the president mentioned getting Americans home from Peru related to the virus.

Also, her rescue did not seem to be connected to the virus although her torture was mentioned. When i read the president’s remarks, I thoughtm they inferred sex trafficking.

I do not know if the person is Holloway, but a progressed chart for now shows a free Sun (Sagittarius). Holloway was 18 when she disappeared May 30, 2005 while in Aruba. While it was thought she was murdered, her remains were never found.

If the woman rescued was Natalee, we should know soon. She would be 33 now and 34 on her birthday in October. 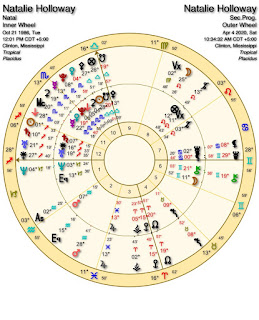