Did Thomas Jefferson really write the Declaration of Independence?

This was something I posted on Facebook this morning:


Well, this is very odd to me - the news had all these myths about Thomas Jefferson and I was thinking, "Too bad these people don't study HISTORY via actual documentation instead of just believing what is told to them, which may or may not be true."
In the past couple of days I was curious about this phrase "pursuit of happiness" that Jefferson allegedly added to the Declaration of Independent, replacing the word he previously had allegedly written - "property." To me, this pursuit of happiness is pretty much what has ruined this country and it would have to show up in TJ's natal chart and progressed and solar arcs via Jupiter.
So I FOR THE FIRST TIME cast his natal chart and the progressed and solar arc charts to the day the Continental Congress actually voted for independence from Britain, which was July 2, 1776 (and the Rev. War had been on for a year at that point).
Jefferson's natal chart does NOT show he wrote the Dec. of Indep. It shows he was a great speaker, but writing talent is just not there!
Of course, his lecherous behavior is there - at 30, he takes his 14-year-old slave girl to Paris with him - she has 6 children by him (for this reason, I've never been a big fan of Jefferson's - all his talk about equality while he owns slaves - that is hypocrisy to me).
Anyway, I thought, well, he must have written a lot of other books or manuscripts. Boy, was I wrong. He wrote letters, which pretty much everyone back then did, and his ONLY other actual lengthy writing was the Parliamentary Procedures Manual for the Senate in 1812. I haven't run Prog and Solar Arc charts for then to see what is there for 1812, but his NATAL CHART does NOT show he was a writer!
Because of his speaking talent, he was chosen to write the DOI, but then a group of 5 members of the Continental Congress edited the document for presentation to the entire Continental Congress and it was that edited version that was voted on July 2, 1776 (John Adams told his wife that July 2 would become a famous holiday and yet it was July 4 that did and hardly anyone even thinks of July 2).
What IS in TJ's natal chart is his ability to invent things and he was known as an inventor with helpful gadgets at his home, Monticello. Obsession with sex is there. Giving people bossy orders is there. His love of the good life is there. Mastering architecture and structure of buildings and a farm is there. Revealing his idea that happiness is the plan of God is there (not all of us agree with that - I happen to think responsibility is stronger, but that is opinion and Saturn in my chart is much stronger than Jupiter), taking credit for what others have done is there. Writing a long and important document like the DOI is just NOT there!
Could we have been fooled all these years? We have been about George Washington and the myth of the cherry tree not to mention the truth that came out when that non-fiction book was published in the 1960s that had Xerox copies of his financial accounts (expense reports) as held by the Library of Congress (showing he spend a LOT more money on expenses than he would have received had he chosen to go for a salary instead of "just pay my expenses" when elected president).
So, I'm truly surprised and glad I never analyzed the natal chart before. Hue-man nature being what it is, at this age, I'm far more able to just accept the place hue-mans stand in according to the oldest religion on the planet, Astrology. Ain't pretty and there are some who are honest, etc., but most are totally controlled by their emotions, not rational thinking. And Thomas Jefferson was one of those (Moon in Cancer, even without the exact time of birth).
Posted by Lee masters at 9:58 AM No comments:

The other day I was at my Daughter-in-Law's and Son's house and we were talking astrology. My DIL said, "Why don't you find that missing girl."

The child to whom she was referring was Shavon Randle, a young teen who lived in Lancaster, TX (Suburb of Dallas) and who was kidnapped from her home on Wednesday, June 28, 2017. She was last seen at 7 am and had turned 13 just 6 days before she was taken.

After the kidnapping, the family stated they received a telephone call from the kidnapper who stated he had the girl. According to news, the family said he didn't mention a ransom.

An Amber alert was announced for her and the FBI was brought into the case.

After I was home on June 30, I did a Horary Chart and will add the chart and grid. It was obvious to me, and depressing, that the girl was dead and that a close relative was involved. I put the chart aside and said nothing about it - the family would want to keep their hope alive as long as possible.

Over the weekend on July 2 the body of Shavon was found in an abandoned house in the 2200 block of Kiest Avenue in the Oak Cliff part of Dallas. With her was the body of an unidentified male, later identified as 19-year-old Michael Titus, one of the 4 people originally identified as a person of interest in the case.

There had been four people who were persons of interest and police had been able to secure two of them (Polley and Owens) and question them. How the police connected to the Oak Cliff house has not been announced at this time.

The four "persons of interest" were Titus, 19 and of Dallas, Devontae Owens (now arrested for the kidnapping), 24 and of Dallas,  Darius Fields, 26 and of Glenn Heights (Dallas suburb), and a female, Laporsha Polley 25, of Dallas. She is the close relative of Shavon's.

The story now is that Laporsha's boyfriend, named Kendall Perkins (now arrested for robbery) was involved in the theft of drugs from Fields and Owens at a Motel 6 in Lancaster and it was Fields and Owens who kidnapped Shavon in hopes of getting back their drugs.

Perkins, 22, was arrested Saturday and charged.

According to an FBI agent, an informant told them that a man (later identified as Owens) told her (the informant) that he planned to kidnap a child to get back the stolen drugs. Also, police had cellphone information that placed Owens near Shavon's home on the morning of the kidnapping and that Owen's phone and Shavon's phone were seen heading off in the same direction until Shavon's phone was turned off.

Fields and Polley were arrested by Irving Police Thursday (day after the kidnapping) at a Best Western hotel in Irving (another suburb of Dallas) and when police entered the hotel room they found Polley trying to flush marijuana down the toilet. Also, ammo, marijuana, drug paraphernalia and other over-the-counter drugs were found in the hotel room and a car (Honda) outside the room contained an AK-47 pistol.

So 3 of the 4 "persons of interest" have been arrested and one of the 4 is dead, plus 2 other people have been arrested (Perkins and Wilkerson). So far, there has been nothing announced regarding who actually murdered Shavon and Titus, whose bodies were found in the house in Oak Cliff. It is thought that Titus may have given police information, but nothing announced on when and where or what info.

Here is the Horary chart and grid calculated using Solar Fire 9.01 (and I use Aquarian Age Astrology with the Asteroids. Solar Fire adds the asteroids by both symbol as well as by number and you can identify them by the fact you have both at the exact same degree and minutes. The little symbol that looks like a very short staircase is for the asteroid ISIS.

Hopefully, you can click on the chart and print it so you can see it enlarged. 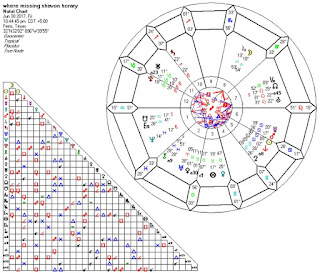 Posted by Lee masters at 7:25 AM No comments: